I got this email recently from our friend Loretta.

‘This Tonga Nature Wing and a Prayer quilt was a BOM from Missouri Star Quilt Company last year. I signed up late and they sent the first 5 blocks a month at a time, but then sent the rest of the kit all in one box !! Yikes !! Well, that scared me and I didn’t work on it for a while. Then I started again and did the center piece and stopped again. Whew. Gotta get this finished because I absolutely fell completely in love with it . . . sooooo, I picked it up again and went full force and ta da !! The quilt top is fully assembled. I am not saying it is wonderful, but to me it is magnificent !! Oh, the kit is all batiks and also included backing/binding fabric !!
The pattern is quite detailed and has a lot of piecing work involved, but the color choices for this kit are fantastic and really “makes” the whole thing in my eyes. I would not hesitate to do this quilt again because the instructions are very easy to follow and they offer time/fabric saving steps up front for a lot of the piecing.”

Check out her beautiful work…. It’s just stunning Loretta.  What marvelous work you did.  You are proof that digging in and finishing up even the most intimidating projects are worth it! Thanks so much for sharing with us all! I’ve been having a great time working on the Kansas City Star Quilt!

This is a quilt pattern that is provided free through the Kansas City Star newspaper on a monthly basis.  They do a new one every year and the patterns usually have a historical link of some kind.  I’m really excited to see the new blocks each month.  I’ve been using the provided fabrics from the Missouri Star Quilt Company, and watching Amy’s (our resident applique specialist!) sample blocks closely, and working hard to try to stay at least close to on time! Hahaha!  I’m already two months back since the May block just came out 🙂

These blocks are done in period style fabrics, I’m thinking it would be pretty cool to see one done in brights just for the fun of it!

This is my January Block April and May are still in the bag.  😀

I’m working on it, but it’s exciting to know that when I’m through I will have a serious treasure, that would have been quite an ordeal to attempt if I was picking up the pattern as a whole and trying to do it all at once.

I know 🙂 but very intimidating! 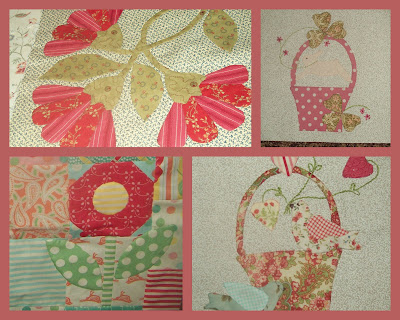 It’s been awhile! My leg is still broken, but I’m not letting that stop me. I’ve been keeping busy with lots of projects. Here are some pictures of just a few of them.

The baskets are part of the Bunny Hill applique Block of the Month series. Aren’t they darling?! I’ve also been working on the Kansas City Star Block of the Month. (top left) The picture on the bottom left is a new charm pack pattern we got in called “Poppy Day” by Pieces from my Heart. I made mine with a Sweet by Urban Chiks charm pack.